When I was in college at the University of Illinois in Champaign-Urbana I worked as a line cook at a restaurant called Coslow’s. It was a typical college hangout with tall dark brown booths, local artwork, and bentwood chairs paired with wobbly tables, a folded paper under one leg to keep them steady. On any given night you could find groups of folks enjoying dinner or playing chess or studying at the back where it was quieter. It was the kind of place where you could meet large groups of friends for lunch or cozy up alone with a good book and a hot drink. It kind of had that Ithaca Moosewood Restaurant feel, although I’ve never been there. I’ve just peeked at the pictures in my cookbook.

Because I worked there I received “chits” with every paycheck. Chits were like play money good only for food at Coslow’s. And for the average college kid, this perk was better than any 401K. It meant a reprieve from college dorm food.

The bottom line: Coslow’s was a great place to hangout but it was even more popular for its food. I can recall homemade calzones, and 3-cheese sandwiches ordered either “3-cheese hot” for a broiled sandwich or “3-cheese cold” for the unmelted version. And the frosted brownies – oh, forget about it!! Soft with crisp edges and a thick layer of rich chocolate frosting. Drool….

But, by far, the most popular item on the menu was Coslow’s nachos. Their nachos bear no resemblance to the ubiquitous bar nachos with processed cheez-whiz only covering the top 10 chips. These chips were spread out on a sheet pan in one even layer, dolloped with homemade re-fried beans, a smattering of chopped tomatoes and black olives, then covered with grated colby-jack and set under the broiler until bubbly and hot. We’d then slide the layer of cheese-quilted chips from the pan into a rectangular wicker basket of about the same size and shape. Scatter some freshly chopped green onions over the top. Then add a small saucer of homemade salsa, sour cream and some sliced jalepenos and serve. Every bite was cheesy and delicious, no chip was ever left behind. 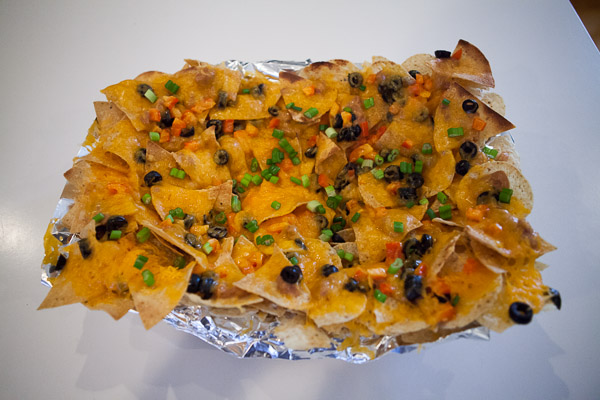 And I have been making my nachos this way every since, passing this technique down to my boys. We don’t always have time for homemade salsa and re-fried beans. The jarred versions stand in on occasion. But the important part is to get that colby-jack to touch each and every chip.

A few years ago, my son took a liking to helping me in the kitchen. These nachos were one of the first recipes he could make all by himself. We convinced him to make a video of himself making these nachos. In it, he calls himself “Chef Chase” and since then the name has stuck.

Preheat the oven broiler on high.

Cover a 13″ x 18″ sheet pan with foil. Then cover the foil with an even layer of chips.

Place the pan of chips under the oven broiler for about 3-4 minutes. Keep a close eye on them as they go from melted to burnt in about 3 seconds. Remove the pan from the oven. Sprinkle the chopped green onions evenly over the chips. Pull foil liner off sheet pan and directly onto your serving platter/basket.

In three small dishes, spoon out the jalapenos, sour cream and salsa and serve as sidecars to the plate of nachos. Serve immediately.